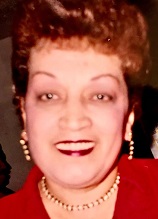 Barbie grew up and spent most of her younger years in the beautiful mountainous region of Barranquitas, Puerto Rico.  Although she was from a big family of 9 siblings, they were very close, and she would often reminisce of all the fun times she had growing up there.   She was always very proud of her humble beginnings and her big Puerto Rican family.  She cherished the various times when she, her husband and children had the opportunity to visit her family and friends at the Island she called home.

In the 1960’s, Barbie moved from Puerto Rico to the U.S.  She lived temporarily in the cities of New York, Philadelphia and then on to Cleveland, Ohio where she met her husband, Antonio Cepeda.  Shortly after, they began their marriage and family with the birth of their two children.  They moved to Mexico where they lived for a few years before settling in Brownsville, Texas.

Barbie cherished raising her children at home.  She was a wonderful mother to her children.   She was a great cook and always enjoyed making food for not only her family but friends as well.  All done with love.  She had a great passion for gardening.  She truly had a special touch for gardening which was so evident to whomever saw her plants, flowers and garden.

Barbie loved sports.  She loved baseball and she really enjoyed watching games with her husband not only in more recent years on the T.V., but also back in their younger years attending live MLB games in Cleveland.   In the 1980’s, Barbie coached a Little Miss Kickball team in Brownsville, Texas.  She really enjoyed her time with the team which included her daughter, Violeta.

Barbie’s one true passion was fishing.  She enjoyed it day or night.  Living along the South Texas coast was a blessing for Barbie and weekend fishing trips were very frequent.

In the latter part of Barbie’s life, she decided to join the workforce and began working at Sam’s Wholesale Club.  She truly enjoyed the interaction with customers and meeting many new friends.  For many that met her, she was known for her cheery disposition, laughter and great humor.  Always with a smile on her face.  Barbie was so very fortunate to have the love and support from her Sam’s family, especially the three special ladies she considered “sisters”; Irma, Elizabeth and Sofia, all whose love for Barbie will never be forgotten.

The Cepeda family would like to thank the many family and close friends for their support, thoughts, prayers and love during her illness. Special thanks to many of the staff at Brownsville Nursing & Rehab Center, particularly her caregivers in the 400 unit, Marie, Pilar, Maria and Carmen.  The family would also like to extend special thanks to the staff at Gracia Hospice and the staff at Sunset Memorial Funeral Home.

Alicia M. Morales, 78, beloved wife, mother, grandmother, aunt and friend went to be with our…