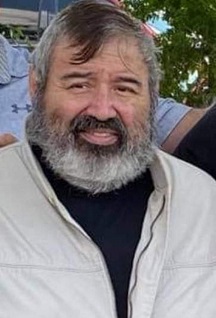 On March 31st, 2021 Frank A. Treviño, 61, entered into eternal rest.
Born March 2, 1960, for many years Frank, oldest son dedicated his life to the care and wellbeing of his mother. He considered himself privileged having that opportunity.
Although in recent years his own strength and health began to diminish, he persevered in this responsibility right up to the time of her passing only one month ago.
In this regard he set a high bar and fine example for others to follow.
He also assisted his mother in caring for the ill and suffering, including his sisters, brother and niece.
He was quick to share anything and all he had with those he considered worse off than himself.
Frank is preceded in death by parents Frank A. Sr. & Lucy siblings Susannah, Lupita Guerrero, Lulu, and Jesse.
Survived by siblings Sandy La Rue, Terry Altheide (Phil) Leonard, Farley (Laura) Mark ( Diana). His beloved nieces Bethany Mire (Jamaal), Christina Valdez (Damian), Amanda Trevino, Sarah Medellin (Axel),  Kayla Hudson (Heath), Lisa Sartin (Shawn). Beloved nephews Adam Guerrero, Mark LaRue (Amanda), Nate LaRue (Jen), Farley E. Treviño (Karina), Donovan Treviño, Michael, Bryan, (Kaitlyn) Zachary, Marshal (Deena) Cazalas, Josh Valladarez (Sky), and numerous great-nieces and great-nephews.
Frank was a faithful brother, son, friend, and neighbor. He was thankful for God’s providence always.
Special thanks to Aunt Linda Rodriguez for her help these last three months. And to Elida Zepeda for her friendship and care of Mom and Frank, sharing her great cooking!
See you in heaven dear brother.