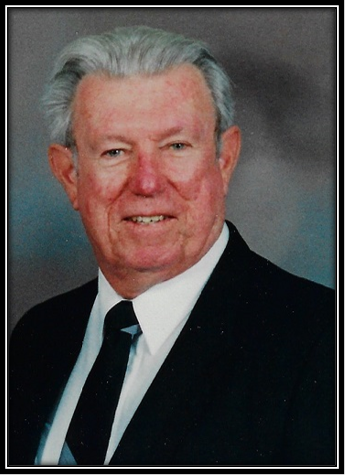 Rufus Green Ransome, Jr., passed away at Solara Specialty Hospital in Brownsville, TX, on Sunday, February, 28, 2021, at the age of 91 years. He was a native of Brownsville, born at Mercy Hospital on September 13, 1929, and he continued to reside here throughout his life.

In 1962, he was married to Mary Jeanine Calderoni, who survives him. He was preceded in death by his parents, Rufus G. Ransome and Kathryn Eidman Ransome, his sister, Ann Ransome Ray, his son Charles William Ransome and his brother-in-law Charles Fount Ray. He is survived by his daughter, Kathryn R. Traynor (Frank) of Houston, TX, and son, Michael E. Ransome (Denise) of Scottsdale, AZ, and daughter-in-law, Melinda Ransome of Sugar Land, TX.  There are 6 surviving grandchildren: Charles Zachary Ransome of Fort Worth, TX, Sarah, Emily and Rebecca Traynor of Houston, TX and Joshua and Olivia Ransome of Scottsdale, AZ. Also surviving are his nephews, Charles F. (“Sandy”) Ray Jr. (Karen), Marshall R. Ray (Mary Lou) and Terry A. Ray (Laurie), all of Brownsville.

Upon graduation from Brownsville High School in 1946, Rufus attended the University of Texas for several years before joining the United States Army on March 5, 1951.  He was assigned to the Military Police branch and served in the Korean War, where he was awarded the Korean Service Medal and United Nations Service Medal. After two years, he was transferred to the United States Army Reserve on February 25, 1953 and then was honorably discharged on November 14, 1956. During his time in the Army Reserve, he attended Texas A&M University where he earned a Bachelor of Floriculture in 1955.

Upon graduation, Rufus traveled to California where he worked at Monrovia Nursery for a short while before returning to Brownsville and starting Ransome Tropicals, a wholesale nursery. In 1962, he opened Ransome’s Gift Shop and eventually introduced fine jewelry, changing the name to Ransome’s Jewelry and Gifts, which he operated until 1990. After that, he traveled the country conducting going out of business sales for jewelry stores that needed his expertise, including locations in Eaton Rapids, MI, Truth or Consequences, NM, Edna, TX, Wenatchee, WA, Lafayette, LA, and Alice, TX.

His hobbies included gardening, fishing, reading, working jigsaw puzzles, hunting and he especially enjoyed spending time with his beloved family and friends. He so enjoyed spending time with family and friends that he organized annual fishing trips for over 20 years to Alaska, British Columbia, Mexico and Costa Rica just to get everyone together in fellowship. One of his favorite sayings was “Fish On!”, and you could hear him bellow it out every time he had a fish on the line.

Memorial services will be private. The burial will be held on March 5 at 1:00 pm at the Rio Grande Valley State Veteran’s Cemetery, 2520 S. Inspiration Rd., Mission, TX 78572. In lieu of flowers, memorial gifts may be given in Rufus’ name to The Rotary Club of Brownsville, P.O. Box 5725, Brownsville, TX 78523 or to the charity of your choice.