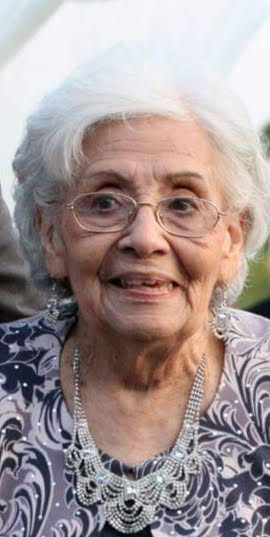 On January 31st, Enedina “Nina” Chandler was received into the loving arms of our Savior Christ Jesus  to be reunited with her husband, Orel Lee Chandler and multiple siblings.
Nina was born in Brownsville, Texas on May 14, 1929, and she later went on to graduate from Edinburg High School. Shortly after, she worked as a bookkeeper for several finance companies throughout her career before retiring in 1987. However before retiring, she met Lee who followed her from Edinburg to Brownsville, and they married on Aug 16th 1954 and remained that way until his untimely death Feb 22 1982.
She was a very giving person of her time in always being available to her siblings, nieces and nephews and especially her grandkids. This was the way her family worked as they always put family over anything else, and this was taught to Nina by those who preceded her in death her parents; Roman and Ysidora Pineda, brothers; Gilberto(Mildred), Roman(Ninfa), Xavier and Johnny Pineda, her sisters; Andrea Fernandez(Jose), Catalina Shull, and Dora Blanchard. She taught it to those who are left behind to cherish her loving memories her children Doris (Adam) Arredondo and Jeffery Chandler, her grandchildren Ariel (Roly) and Zane (Robin) Arredondo. Her great grandkids; Calix, Adara Rosales and Rylee Arredondo. Her brother-in-law Bert Blanchard, and sister-in-laws Gracie and Alejandra Pineda as well as several nieces and nephews. A very special thanks to her nieces Norma, Becky, Sandy, and Nancy who stayed by her side in her final days. Funeral services will be held on Saturday, Feburary 2, 2019 at Sunset Memorial Funeral Home for 12 PM for viewing and a church service at 7 PM.