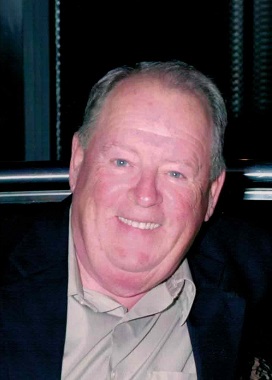 Arthur W. Monaghan born on April 21, 1938 at St. Albans, Vermont peacefully passed away on Saturday, November 25, 2017 at his residence surrounded by loving family.
He is preceded in death by his parents Carl and Margaret, nee Lampman; and his first wife Teresa. He is survived by his wife Geri; sons Jonathan (Kim) O’Connor, Arthur, daughter Eileen (Gino) Girelli, a sister Pat Iverson; and stepdaughters Susan Perella, Cindy Perella, Beth Zullo and Judy (Doug) Zirkle, 12 grandchildren, and 13 great-grandchildren. He enjoyed his grandchildren and great-grandchildren who called him “Papi” and they loved him dearly. Art completed his degree at the University of Vermont, Burlington, VT. While at the university he enjoyed broadcasting. After leasing a gas station for three years, he went into office supply business with two other friends. He was very talented in graphic arts and after several years, he went into the printing business and graphic arts design. He owned his own shop in New York and was in the printing business for thirty years. Semi-retired, he designed maps for the Vermont campgrounds. After moving to Texas, he formed the company, Magic Valley Marketing, designed brochures and business cards for business in Brownsville. After a bad automobile accident, he had to dissolve the company. He was always a great cook and decided to create a good recipe for Italian sausage since he couldn’t find any down here. He became the “Sausage man” and made Italian and Jalapeno sausage, which he sold at the South Padre Island Farmer’s Market. Art was a lover of jazz music and he and his wife Geri attended many music and jazz festivals over the years. They went on many cruises and enjoyed traveling. They spent theirs summers in Vermont until he was too ill to travel. Art enjoyed playing poker, having a poker night with family and friends. He was very well liked by his friends and loved by his family. He will be missed.
Visitation will be held on Thursday, November 30, 2017 at Sunset Memorial Funeral Home & Crematory from 1:00 to 9:00 p.m. with a prayer service at 7:00 p.m. Services will conclude at the end of the visitation. 657 Springmart Blvd., Brownsville, Texas, 78526. (956) 350-8485