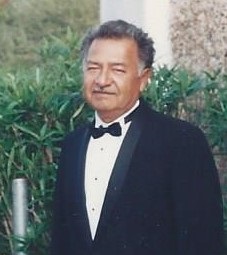 He is preceded in death by his son Pedro Esparza (35), whose passing devastated him and his favorite grandson, Andy Ralph Olguin (27). His father was from El Ranchito Texas and moved to Matamoros, Tamaulipas because of the War. His favorite dog, Chepo also died prematurely, as if sensing his owners’ early departure.

Left to cherish his memory is: his daughter Delia (with whom he had lunch all the time), his daughter Eva (that always came to visit him from Houston with her husband Andres Olguin), and his daughters Diana and Chela.  His son Jose Enrique Esparza was at his bedside for several years, caring for him.  His wife Francisca (Panchita), grandchildren: (Jesse Lee Olguin, Bonnie Garza, Abraham Garza), and great-grand-children (Danilo, Liam, Julieta, Gael, Sofia).

He will be greatly missed.  He left behind his tomato garden, his beautiful guayaberas, his hats and caps and a long string of good memories (boxing matches, soccer games, baseball games, old stories from his youth) that will forever stay in our hearts.  He was a farmer, and enjoyed working at the garden. He had many friends and regularly visited them with his daughter Delia.