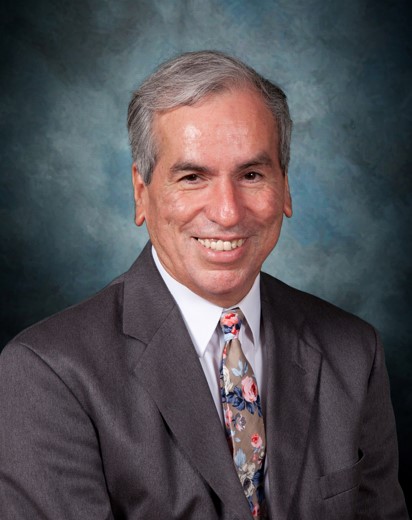 Ronnie was born on July 14, 1954, to Manuel Zamora and Maria Rivera in Brownsville. After graduating from Brownsville High School in 1972 and earning his associate’s degree from Texas Southmost College, he continued his studies at The University of Texas at Austin, where he served as the Sports Editor of the Daily Texan and graduated with a Bachelor of Arts in Communications.

Ronnie amassed a stellar career in journalism, public relations and communications over a span of 50 years. His legendary career unexpectedly began at age 16 during the spring of his junior year in high school, when he began writing for the Brownsville Herald. Initially tasked with only turning in sports stats, he tried his hand at writing and found his calling. He worked tirelessly as a full-time sports writer through his senior year in high school and was offered the role of Sports Editor of the Herald soon after graduating.

He spent the next three years attending school at Texas Southmost College while working full time as the Sports Editor for the Herald. Soon after, he packed up his things, some friends and his girlfriend, Yoli (later his wife), in his 1973 Royal Blue Volkswagen Superbeetle and headed to the University of Texas at Austin in the fall of 1975.

Ronnie arrived on the UT campus ready to pay his own way with money he’d earned at the Herald, and already having proven his worth as a journalist — but that did not matter when he arrived at the Daily Texan in Austin. He was ready and willing to work harder in order to prove himself, and that he did. By his senior year, he took an opportunity that was not assigned to him, and ended up writing a retirement article about legendary coach Darrell K. Royal that landed him on the front page of sports, and eventually, the promotion to Sports Editor of the Texan. After graduating from UT, Ronnie took a job as the Sports Editor of the Valley Morning Star for two years, then served as a sports writer for the San Antonio Light. During this time, he married longtime girlfriend, Yolanda “Yoli” Tillman in 1978 and the two moved back to Brownsville to await the birth of their first child in 1981.

Ronnie resumed his role as Sports Editor of the Brownsville Herald before a stint as Managing Editor through 1986. Afterward, he transitioned into a new field as the Public Information Officer for Brownsville Independent School District and became the Director of the Public Information Office at Texas Southmost College in 1990. In 1992, TSC merged with the University of Texas at Brownsville, and Ronnie continued as the Director of Publications at UTB-TSC for 14 years before transitioning into a brand new role as the Director of Sports Information for the athletics department through 2012. Following his 20-year tenure at UTB-TSC, Ronnie  embarked on a new opportunity as the Public Relations Coordinator for Los Fresnos CISD until his retirement in December 2021.

Ronnie’s community service included many roles for which people remember him. He broadcast High School football games on KBOR for eight years and was the Public Address Announcer for football games at Sam’s Memorial Stadium for 16 years beginning in 1986. He played in city softball leagues in Austin and Brownsville as a pitcher for 18 years. In 1988, he joined the Border Fantasy Football League and went on to spend 33 years in that same league, including serving as commissioner for 15 years.

He has played an integral role with the Rio Grande Valley Sports Hall of Fame, including serving as the Master of Ceremonies for inductions for 25 years, spending 20 years on the Board of Directors and serving two terms as chairman. Ronnie was inducted into the RGV Sports Hall of Fame in 2011 for his illustrious career in sports journalism.

Additionally, Ronnie coached West Brownsville Little League for eight years, served on the board for St. Mary’s Catholic School and was part of the steering committee for the Brownsville Children’s First Bond Campaign in 1998 that resulted in the construction of the Margaret Clark Aquatic Center.

Ronnie spent his life making a positive impact on his community by consistently and tirelessly sharing his talents, experiences and vast knowledge. He was happy to teach, mentor and offer opportunities; he celebrated others, and he saw the best in everyone he met.

He is preceded in death by his parents, Manuel and Maria Zamora. He is survived by his wife, Yolanda, and three children: daughter Julianna Zamora Rivers (William) of Austin; son Ronnie Zamora, Jr. (Sarah) of Brownsville and daughter Laura Zamora of Dallas; as well as his three grandchildren: Michael and Sofia Zamora of Brownsville and Tillman Rivers of Austin.

Visitation will be held from 1 to 8 p.m. with a recitation of the holy rosary at 6 p.m. on Sunday, Jan. 16 at Sunset Memorial Funeral Home.

To honor Ronnie’s legacy, please consider a donation to the Ronnie Zamora Memorial Scholarship Fund at the University of Texas at Austin. Visit give.utexas.edu to learn more.